Newbyres castle is one of those hidden gems. Tucked away behind Newbyres Hall on Gorebridge Main Street, you could once have quite easily walked past the ruins, which were covered by debris and vegetation, not knowing it is an Historic Scotland scheduled monument. But no longer. On behalf of Gorebridge Community Development Trust I have run a series of workshops to investigate the castle and the area around, which have involved regularly clearing the area. This has been done with the help of Archaeology Scotland after the castle was ‘adopted’ by the Adopt-a-Monument Scheme – a nation-wide community archaeology scheme that provides practical advice, training and helps to raise funds.

Newbyres Tower, as it was known, is a 16th century pele tower house, used as a look-out and for refuge It had an L-plan of which only the NE corner stands.
When I joined GCDT the design for a garden around the ruins was just being finalised and works were completed in 2009. Unfortunately since then the gardens have not been properly maintained and most of the growth around the castle returned. Over the past two years, with the the help of the Prince’s Trust and a team of volunteers, including archaeology students from Edinburgh University, we cleared the site and cut back all the young trees from the area around the ruins.

Alongside this we have carried out several types of 2D and 3D surveys including geophysical surveys with Rose Geophysical Consultants LLP. Dr. Piers Dixon, archaeologist at Historic Environment Scotland (HES), led an archaeological / historical interpretation tour of castle and surrounding area by examining the flat areas and man-made banks.

We are now in discussions with HES and Archaeology Scotland about raising funds to carry out several archaeological pit excavations in areas highlighted by the geophysical report to test our theories about the buildings that may have surrounded the castle. To stop the continuous deterioration of the castle the ruins need to be consolidated which we will be applying for further funds for later. As part of this we hope to take the ground inside and around the castle back to its original level, thereby exposing more of the stone walls and giving a much better sense of what the castle used to be like. 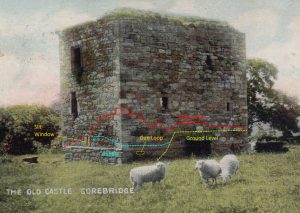 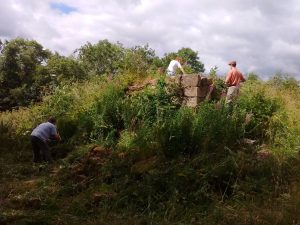